Bass Fishing In The Boundary Waters

The Boundary Waters Canoe Area Wilderness (BWCAW) in northern Minnesota is home to an abundant and diverse population of wildlife and fish. Unfortunately the pristine waters of this place are currently threatened by proposed sulfide ore copper mining interests that are backed by a company based in South America. Sportsmen for the Boundary Waters is a group of sporting men and women who love to hunt and fish in this special place and who are telling our elected leaders that this not the place for this type of mining. Please take action today in support of these efforts by linking to the website and making your voice heard. Following is a quick excerpt from a trip I took last year to the BWCAW where I went bass fishing with my friend Joe Friedrichs. We also ran into Dave & Amy Freeman who had recently spent an entire year in the Wilderness to show their support for protection of this place. 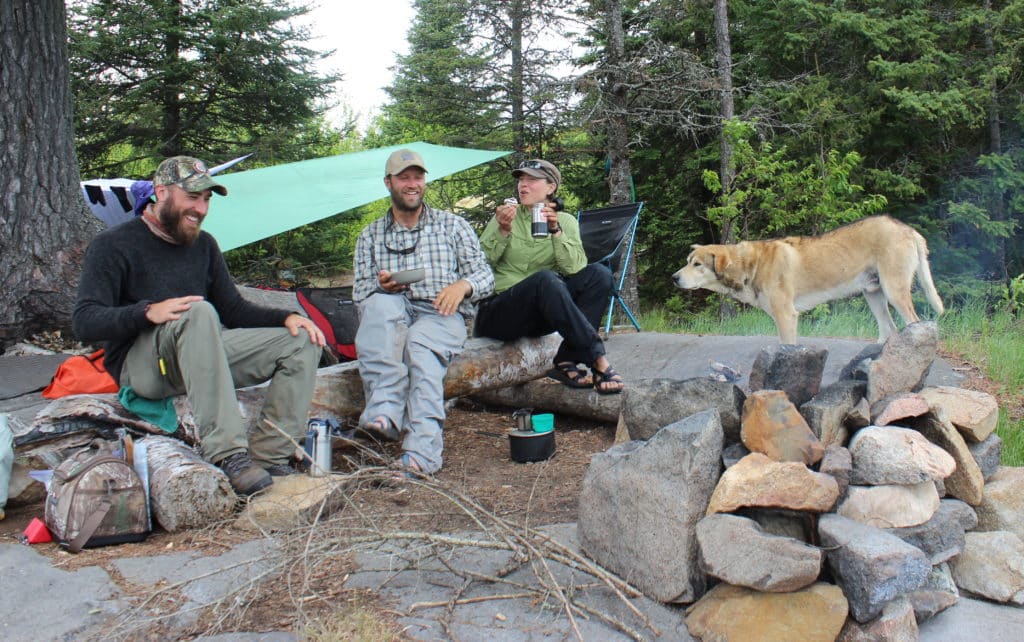 The lake had just calmed to glass as we sat in camp talking to Dave and Amy Freeman about their Year In The Wilderness adventure.  After sharing some stories over coffee and some Worlds Best Donuts we discovered we had an hour or so to kill while the Freemans wrote a pod cast.  Joe Friedrichs and I were hoping we might get an opportunity to do a little fishing while we were there since it was the beginning of prime top water bass fishing.  We knew our window had presented itself and wasted no time getting out on the water.

Thanks to Rockwood Lodge & Outfitter we had a beautiful canoe and bent shaft paddles.  We swiftly, and effortlessly, made our way across the lake to target some bays we had been eyeing from camp.  We had an array of options for tackle including poppers, torpedos, jitterbugs, soft baits and spinners.  Our goal was to find out if the Smallies were beginning to bed, thus ready to smack into our top water baits.  Having the Mepps spinners was a backup plan and one that most people don’t use as much in this situation.  Thanks to a good friend of mine I have seen those spinners take some pretty awesome fish at this time of year.

We began our little excursion by throwing the topwaters and soon discovered that the bass were pushed all the way against shore.  Once we figured that out the game was on.  Cast after cast resulted in a strike.  Joe and I paddled the shoreline making sure to creep along to not spook the fish out.  We came upon a rock face with a bit of deeper water so I decided to throw the Mepps in for a few casts.  A nice 17 incher smacked it on the second cast proving that spinners effectiveness.  I proudly took a picture and released the beautiful fish back to the depths of the lake. Hopefully Ill make it back next year to catch it again when it’s just a little bit bigger.

Lukas Leaf is a Minnesota-based chef. He was most recently Executive Chef at the award-winning Al Vento restaurant in south Minneapolis. He strives to use local, seasonal, sustainable and wild ingredients in his cooking whenever possible. Lukas is an avid, passionate outdoorsman and an active board member for the MN chapter of Backcountry Hunters & Anglers. Lukas spends his free time fishing, foraging, hunting, camping and cooking in the great outdoors with family and friends.