The Craft of Darkhouse Spearfishing

Editor’s Note: This post is part of the Hardwater Hunters series by Modern Carnivore focused on darkhouse spearfishing. Look for other posts in this series by clicking on this link.)

In the niche of Darkhouse spearfishing, craftsmen and women are revered. Decoy makers enter their finest “show” decoys into events for formal judging a number of times each year. You see, the most sought after makers only sell their “worker” decoys to mere mortals like you and me. The blacksmiths who craft the spears have dedicated followings, with folks on wait lists to buy new spears. For both old spears and even more so for old decoys, there is an active folk art collector market with some spears and decoys consistently fetching hundreds of dollars.

But without the work of a Northwest Minnesota craftsman, operating out of an 83 year old barn, it would be much harder for many of us to even get our gear in the water.

Wayne Benbo has been fabricating Fish’s Ice Saws for the past 25 years. The story of the advent and rise to near ubiquity of these fine pieces, with their characteristic blue blade, is a story of persistence.

Starting out, Wayne took on the task of designing a functional ice saw to pass the time in the winter during the off time from farming. In the first year, the design process took months. He would draw a design send it to a metal fabrication shop, who would cut and return an unsharpened, flat metal blank. Then, in the barn, he’d experiment with nearly every aspect of the saw: length, weight, balance point, number of teeth, angle of the teeth to the spine of the saw, and cutting edge angle- experimenting with multiple variables simultaneously.

Finding the Ways to NOT Cut Ice

Once he had a new design, he’d put the saw to the ice. “Early on, I don’t think the first couple could even cut ice,” he stated in a recent interview. When I asked about the number of design iterations, he simply lost count stating only, “There were a lot that went right to the scrap pile.”

By the end of the first winter, after dozens of iterations, he had a saw that would cut lake ice smoothly. Sadly, it was too late to get anything to market for that ice fishing season.

The next year winter, when farm chores concluded for the year, he began selling the saws locally.
“Well, the first few went just around here. Then, I started supplying L&M Fleet in Grand Rapids.”

“Pretty soon I was supplying Mills Fleet Farm, Cabelas, and lots of bait shops. Then, with the internet, things really got crazy.”

“I’ve sold them to folks all over the US, Canada, Norway, Russia, Greenland, and Australia” 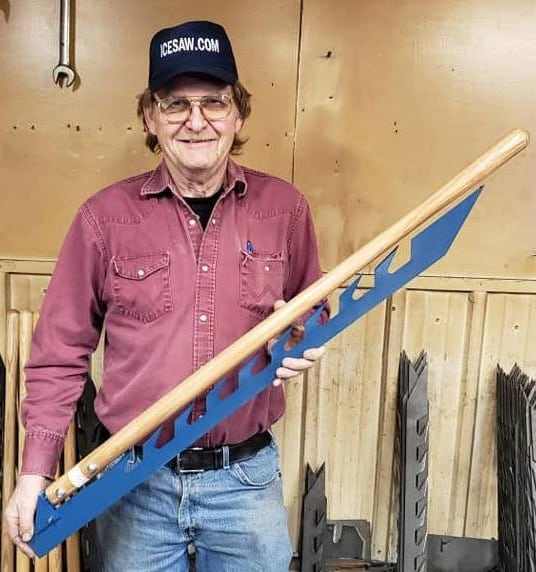 Wayne Benbo with his Fish’s Saw

More than a Spearfishing Tool

In the last 25 years, there’s only been one significant change to the design, which he characterized as a small tweak. Fish’s saws work so well, that people use them for more than ice fishing. Norwegian scientists use his saws to collect samples. A University in California uses a Fish’s saw to study lake ice in the Sierra Nevada and an Australian College uses them for research in Antarctica.

For all the international attention, Wayne is still concerned with the opinion of his most loyal customers- Minnesota Darkhouse spearing enthusiasts who buy his spears at retailers like Scheel’s, Reed’s, and many smaller bait shops. “The most important thing is what folks are saying out on the ice. If there’s something wrong with it, I fix it. One bad word goes further than ten good ones.”

He assembles, sharpens, paints, and ships over a thousand saws a year, by himself, running the entire business out of his barn. In good years, he will fill up to 1,500 orders. With over 25,000 of his saws cutting ice around the world, Wayne manages to stay grounded.

“Well, unlike a chainsaw, my saw always starts…unless you’re hungover.” 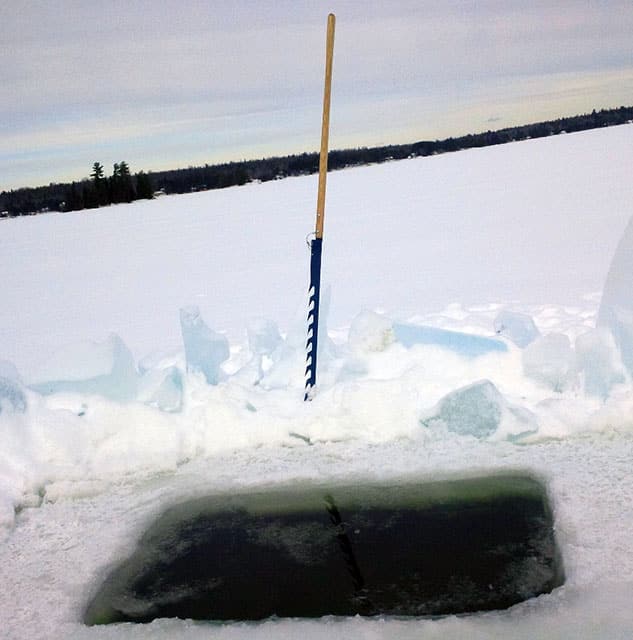 Darkhouse Spearing with Janis and Mark

How to cut a spearfishing hole (MeatEater)

Pike Fever and the Lure of Spearing Fish by Jamie Carlson