Recently I wrote about cooking a duck breast. Admittedly the breast is a very delicious part of this migratory bird, and it can be easier to cook when it’s by itself. But what do you do with the rest of the bird after cooking the breast? Well it starts back in the field when you determine how you’re going to clean the bird. I always encourage people to pluck the birds you shoot because there are a lot of different and wonderful things you can do with a whole bird, like a duck confit.

I’ve heard a number of people complain that there isn’t enough meat on the rest of the duck to bother with. I would agree with that statement in one way. If you only shoot one small duck in your entire season it might not be worth it. But if you have two, like I did for this post, then it’s plenty worth your time and energy to use the whole bird.

Why Pluck The Duck? 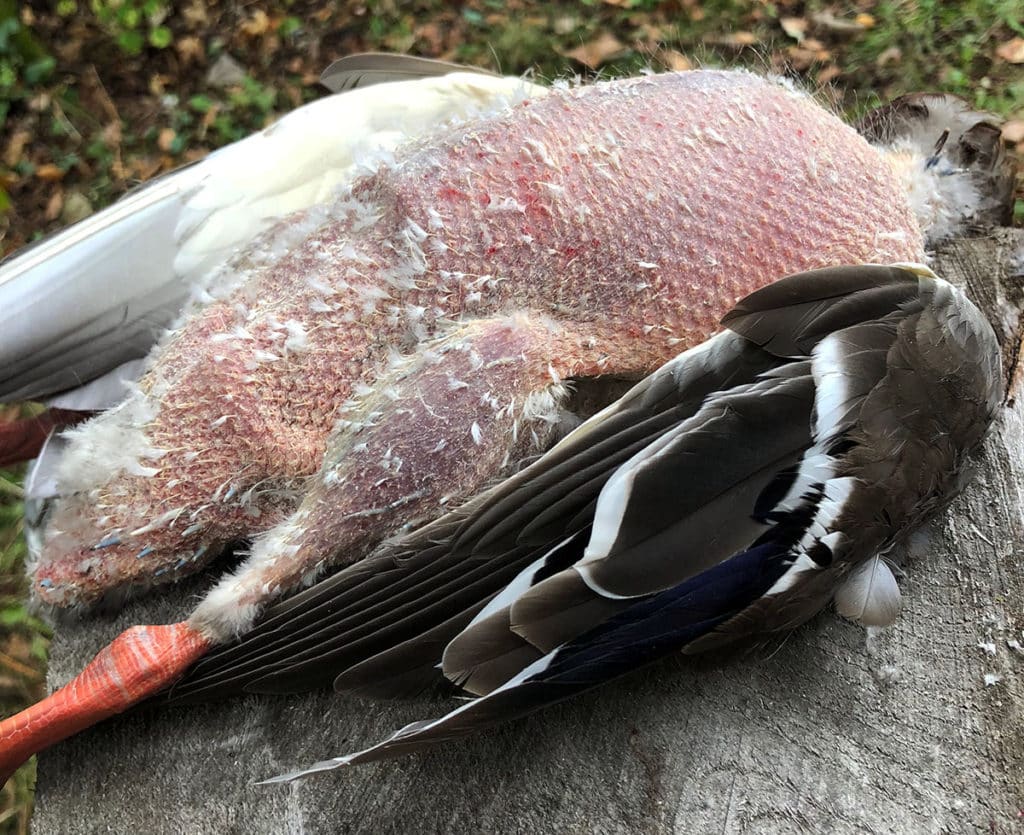 Even if you’re not going to roast the whole duck, plucking it generally makes the most sense. Only by plucking it can you get the nice skin on breasts that many folks love. Once the breasts are removed you can cut off the leg and thigh portions, and on bigger ducks and geese you can remove the wings as well. What you have left is the body which can be roasted and made into stock which I’ll write about in another post that will be coming out soon.

Once you have the leg and thigh portions of the duck separated from the carcass you may be asking what you should you do with them. There are a lot of tendons in the legs and the meat can be tough. I find the best thing to do is to braise them. Cooking them in liquid at a low temp for a long period of time will give you the best results. Soups and stews are great ways to use the leg and thigh portions. For the more adventurous, a duck leg barbacoa taco may be the ticket. 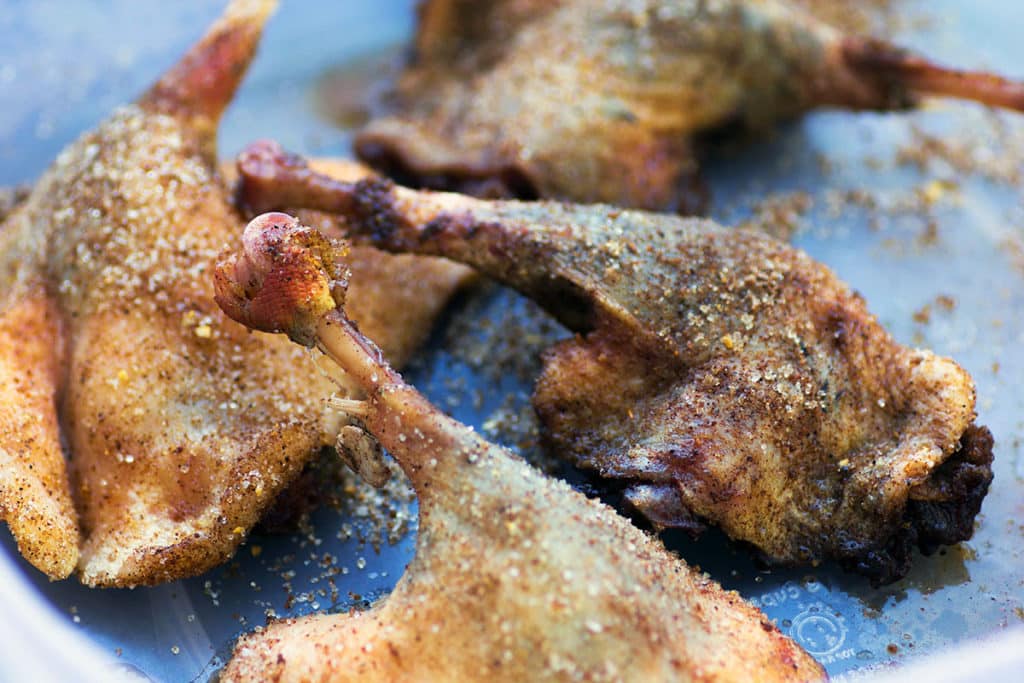 One of the methods I like to use is known as confit. It is an ancient preservation technique that involves curing the meat and then cooking it at a low temperature in its own fat. The end result is a beautifully succulent meat that can be used in dozens of ways. As a bonus once you have confit’d the leg and thigh portions they will be preserved and can be stored in your freezer almost indefinitely. The process to confit might not be appropriate for just one duck, but if you save your leg and thigh portions and make a large batch of them it can be well worth your while.

So what does it take to confit something? You’ll need rendered fat. You can confit in oil but I’ve never tried it and can’t speak to the results. I’ve used rendered pork, duck and goose fat for all of my confit dishes. You might be asking, where the heck do you get rendered fat? I buy duck fat from Clancey’s meats in Minneapolis which is a smaller neighborhood butcher. You should be able to find duck fat at any good butcher shop. I also render as much fat as possible off the ducks and geese that I shoot. If you shoot a fair amount of fowl every year you can get a good supply of fat from them. A quick search on YouTube will get you a great tutorial on how to do it. Here’s one example from Holly Heyser.

Once you have fat you just need to decide which parts of the bird you want to confit. You can confit any of the leg and thigh portions of all the birds you shoot. I also like to save all the wings from the ducks and geese I shoot. There isn’t much meat on a wing but if you shoot a dozen ducks in a season and save them all you can collect a lot of meat off them all. Whenever I make confit I usually use four goose legs or 6-8 duck legs in one batch. That is about all that will fit in my pot. If you have a large enough pot and enough fat you could do as many as you wanted.

Once you have your duck confit what are you going to do with it? From the four duck legs I had I got about 3/4 cup of meat. I mixed that with some wild mushrooms and used it as a filling for pierogis. You can use the confit on salads, in tacos, or to make rillettes. The possibilities are endless.

Rinse all the salt mixture off the legs and dry completely

Place in the oven at 200 degrees for 5-6 hours, you will know when the legs are done when the meat and skin have pulled away from the knuckle on the leg bone.

If you are going to store your confit for future use you can just place them in a zippered freezer bag with some of the rendered fat and put in the freezer. Or you can just pack them into a container and cover with remaining rendered fat.

Mix all ingredients together and form a ball. Don’t over-work it.  Wrap in plastic and place in the fridge for 2 hours, or overnight.

Meat from the confit of duck, finely chopped

8 ounces of your favorite mushrooms, diced

Melt the butter in the pan over medium high heat and stir in the garlic. Add the mushrooms and sauté until soft and tender. Season with salt and pepper.

Mix the mushrooms and duck confit together and chop finely

Remove the dough from the fridge and dust a work surface with flour. Roll out your dough until it’s about an 1/8 inch thick, then cut out circles with a cookie cutter (about 3-4 inches in diameter). Place a spoonful of meat in the middle of the circles and fold over.  Crimp the dough with the tines of a fork and then boil the pierogi until they float. Cook them for 4 minutes at a gentle boil.   Take the pierogi out of the water and set them aside on a paper towel to dry. Brown them in butter for 2-3 minutes per side or until golden brown.  Serve with some creamed horseradish.