Foraged fiddleheads are the furled fronds of a young fern. Say that 10 times really fast! 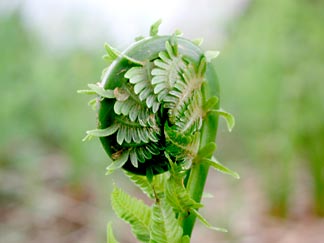 The Ostrich Fern Fiddlehead is edible

If you’ve never tried fiddleheads you’re missing out on a fun way to get your greens. They’re harvested during springtime when the ferns are just starting to grow. You’ll need to find them before they’ve unfurled and spread out their leaves. When you get them at the right time they’re a great addition to your meal. I recently harvested a batch from southern Minnesota along with a few ramps. I sautéed them in butter with the ramps and they were excellent. They’ll make a great side dish to any meat and I’m sure there are many creative ways you could incorporate them into dishes.

Fiddleheads have been part of a traditional diet in France since the middle ages. Asian cultures have cooked the young ferns in coconut sauce spiced with chili peppers. In recent times there has been a resurgence of interest in the United States to forage for these tender greens as part of the “locavore movement”.

Fiddleheads contain various vitamins and minerals, as well as omega-3 and omega-6 fatty acids. They are a source of antioxidants and dietary fibre.[2] They are low in sodium, but rich in potassium, which may make them suitable for people who need a low-sodium diet.[6] Fiddleheads may harbor microbes, and should be washed and cooked before eating.[2] Many ferns also contain the enzyme thiaminase, which breaks down thiamine. This can lead to beriberi, if consumed in extreme excess.[7]

Harvest the Ostrich Fern early in the season before the frond has opened. Cut the plant when it’s close to the ground and take only a few of the tops on a single plant. Leave the rest as this will ensure a sustainable harvest. If a plant is over-harvested too many times it can eventually kill it so it’s important to forage responsibly. 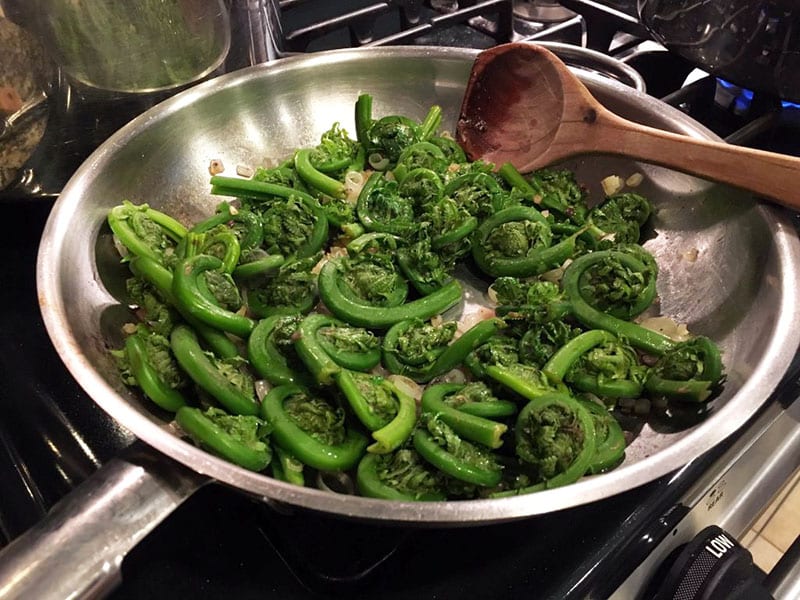 There are many ways to prepare fiddleheads. For very simple preparations just steam, boil or sauté them in a pan. Make sure you wash them properly before cooking to remove all of the brown casing that easily breaks off of the plant.