Pike Fever And The Lure Of Spearing Fish 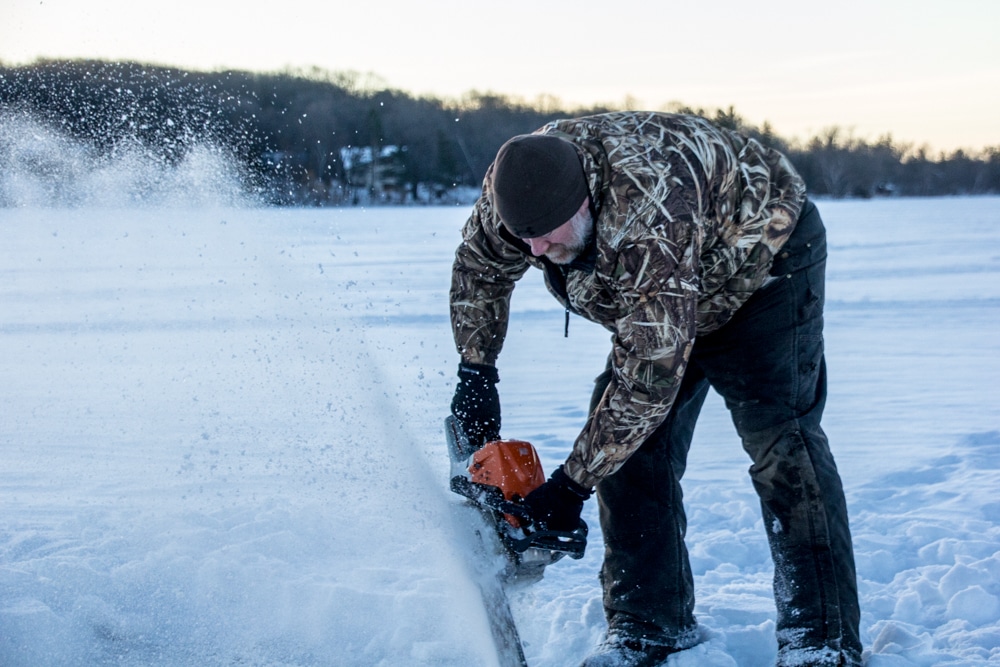 There is a well known phenomenon in the hunting world called “buck fever”. Many seasoned hunters and newbies alike have fallen victim to it. You can practice all you want for your hunt but nothing fully prepares you for that moment when  a monster buck steps out of the woods and gives you an opportunity at a shot. Your heart races and you can feel it beat in every inch of your body.

Many hunters have a hard time remembering what comes next. The release of an arrow, or firing of a shot seems a distant memory just after the experience. Sometimes you hit your target and sometimes you don’t. Either way there is just blank time in your memory, and you struggle to remember what can be considered that most critical of moments in the hunt.

It has happened to every hunter at some point. Whether it was your first deer or your first really big buck, the feeling is unavoidable. What most people don’t know is that this can happen when your not aiming at a once in a life time buck. It can happen when you’re not even hunting, but spearing fish. 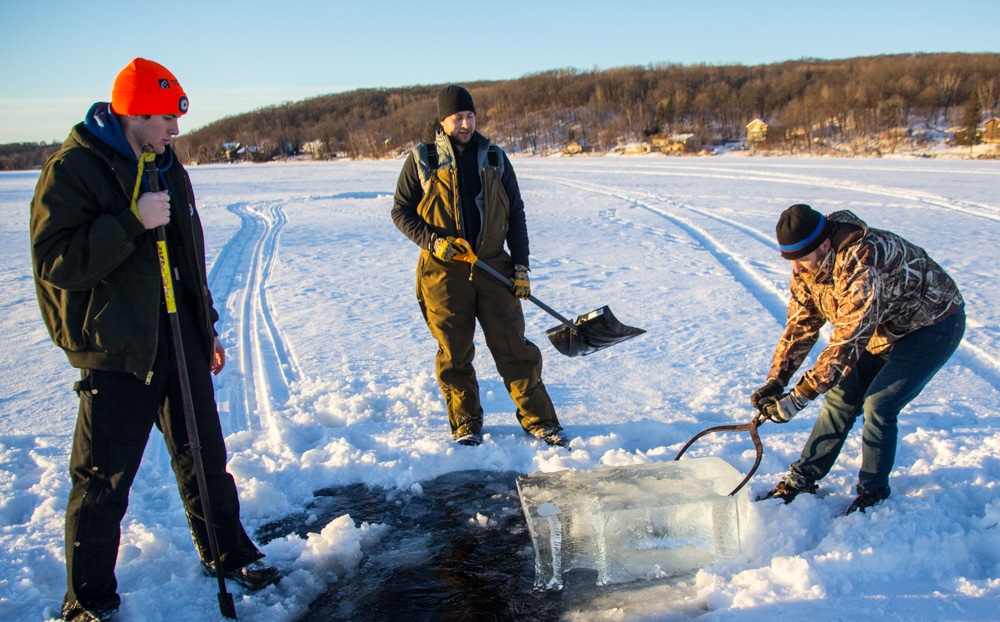 The lesser known version of this malady is pike fever. Much like buck fever it comes at the end of a long wait and many hours of anticipating the moment. I recently witnessed pike fever while out for a day of spearing fish, northern pike to be exact, on a central Minnesota lake.

Spearing fish is a fascinating subculture of ice fishing. Unlike ice anglers who set out with hook and line to catch their fish, the tool of choice for these hearty souls is a metal spear. Spearing fish is a lot more like hunting than it is fishing. You have to scout out an area where you think large northern pike might swim by you. Then you cut  large hole in the ice and set a “dark house” (a portable pop-up shelter or semi-permanent fishing shack) over the hole to block out the light. (See the process in our previous video post.) 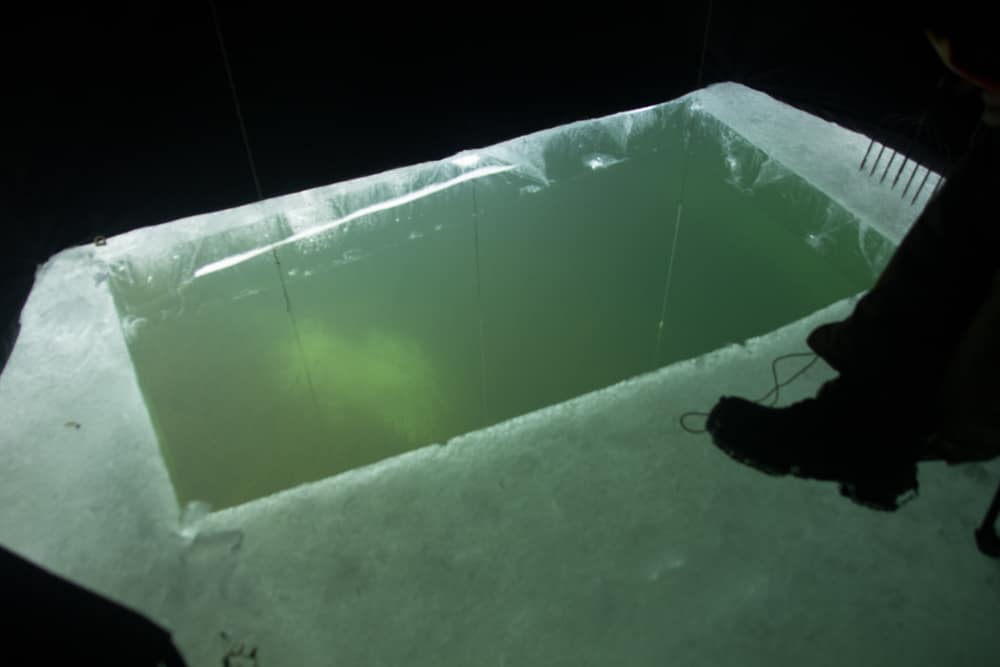 Peering Into The Underworld

The next part in this process is to start peering in on what is basically the best aquarium you have ever seen. On lakes with good water clarity you can see the bottom of the lake as deep as 15 feet, and all the fish that swim beneath you. At this point it becomes a waiting game to see if you picked the right spot.

In Minnesota spearing fish of certain types is legal from a dark house during the winter months. This includes Northern Pike, Lake Whitefish and several species of rough fish. There are days that you won’t see a single pike but you are always treated to some variety of fish swimming beneath your feet.

On a recent outing five of us spent the whole day out trying to get a monster. Between the five of us we saw walleye, bass, trout and a bunch of northern pike. We managed to spear a few small Northerns, but we never managed to connect with a true monster. 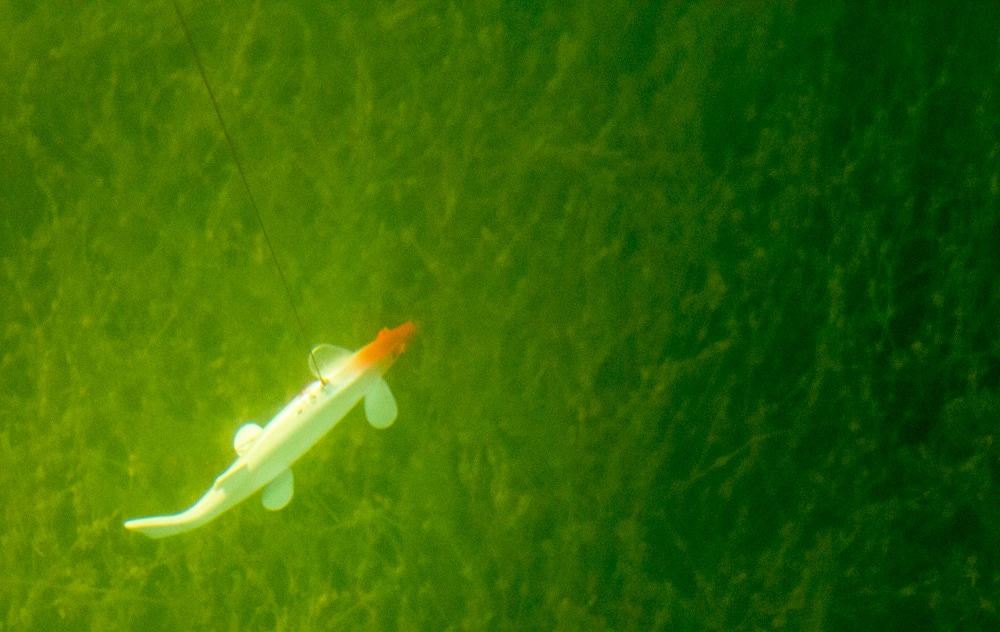 Darkhouse spearing decoy “swimming” on the end of a jig stick to attract a big pike.

Towards the end of our day I had pretty much given up on seeing a big fish. My buddy Shawn, who was in a dark house about 40 yards away, sent me a text saying that he’d just laid eyes on the biggest pike he had ever seen. Immediately after getting the text I saw what looked like a small submarine drift through my hole, without even looking at my decoy.

It was the fish we had been waiting for all day. Quickly I jigged my decoy a couple of times hoping it would attract the eye of this giant fish. I waited about five minutes until I was certain it wasn’t coming back. I ran over to Shawn’s dark house to see if he had gotten a chance at the fish. The big pike had done the same thing to him. He just got a quick glimpse of the beast, and it kept on swimming. 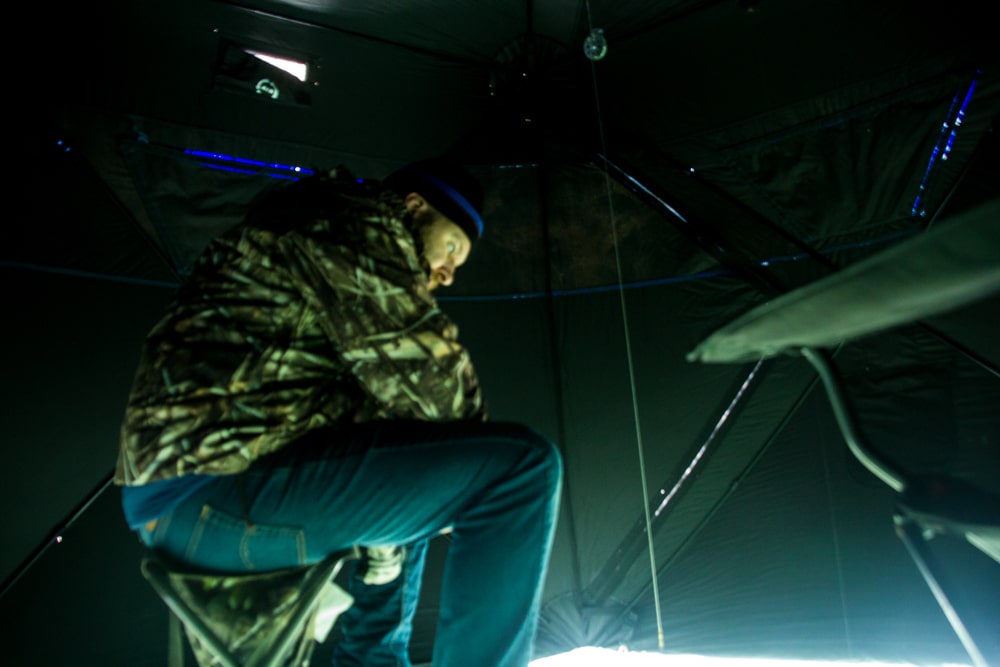 As we stood there hoping it would show itself again I looked down the hole and saw a different fish. I pointed it out to Shawn and he got his spear ready. As the fish moved in towards Shawn’s decoy he got his spear over the top of it. Right before the fish reached his decoy it darted to the left and started making its way out of the hole. Shawn tossed his spear through the water column, but missed by a country mile.

I couldn’t believe what I had just seen. What looked like a sure thing ended in a clear miss. I asked Shawn what happened, but he didn’t know. I relayed to him what had just occurred, but he didn’t remember the fish turning. After seeing the giant pike pass through his hole and having this big fish so close…he had the pike fever.

It wasn’t the biggest fish we’d seen but it was easily a 30 inch pike, which would have been great to bring home. After waiting and watching all day, when the opportunity finally came it was just too much for him. The upside to Pike fever is that it always leaves you wanting more. That night at dinner all we could talk about was when we were going to get back out and try it again.