Over the last few years, spearing has really taken a hold on me. It has become my “go-to” winter activity. If I could spend the entire winter staring down a giant hole cut in the ice, I would. As a result, I have become borderline obsessed with getting a 40-inch northern pike. Yet, I am equally as happy throwing my spear at every 20-inch northern pike that comes into view.

Last year, Mark Norquist introduced me to spearing whitefish for the first time. I had always assumed that northern pike was the fish only worth spearing. As a big fan of whitefish meat I don’t know why it never occurred to me to target them with a spear.

Spearing whitefish here in Minnesota is really no different than spearing northern pike. Everyone has their own opinions on what the best way to do it is. Typically, whitefish are a deep water fish. However, they do migrate to shallower water to find gravel beds for spawning. This is the time when they are the most visible for darkhouse spearing.  When I learned this, I mentioned the idea to my good friend Bryan Frana, and he was all in. We asked around and checked with our local Conservation Officer. During this process, we found a lake in north central Minnesota that seemed to have what we were looking for.

When we arrived at the lake I had to laugh. It was pretty obvious where we wanted to be. People who spear typically will leave sticks and branches in their holes. This is so that others can see where an open hole might be. While looking out on the lake, there was an area that looked like a small forest with dozens of sticks poking up from the ice. 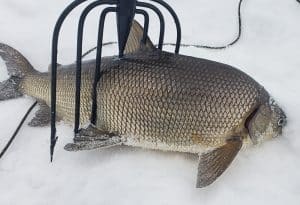 Speared whitefish on the ice.

Bryan and I picked a spot in about 10 feet of water and cut a spearing hole. It was overcast that day so the visibility was not as good as we had hoped. As we sat there looking into an ever changing aquarium, we noticed huge schools of baitfish passing through our hole. The second time we saw the baitfish, I noticed a large shadow just outside of the school. I thought it was a northern pike, but it never came in. The third time the school passed by, I notice the large shadow again. This time it came through from underneath us, swimming away. It was not a northern pike but neither of us could positively identify the fish.  A couple minutes later, the fish was back, swimming towards us this time.  It got only a few feet from the ice and turned. When we had a good look at its side, we instantly knew it was a whitefish. Bryan grabbed his spear and made a brilliant throw back underneath the ice where we were sitting. When he hit the whitefish you would have thought he just got a 12 point buck. The excitement level was through the roof.

Neither of us had ever attempted spearing for whitefish before. So, to go out and get one on our first try, was truly amazing. For the rest of the day we saw one other whitefish but never got a chance at it. We think that we missed the peak of the spawning run by a couple of weeks, but now that we have an idea where to fish, it will make scheduling easier for next time. 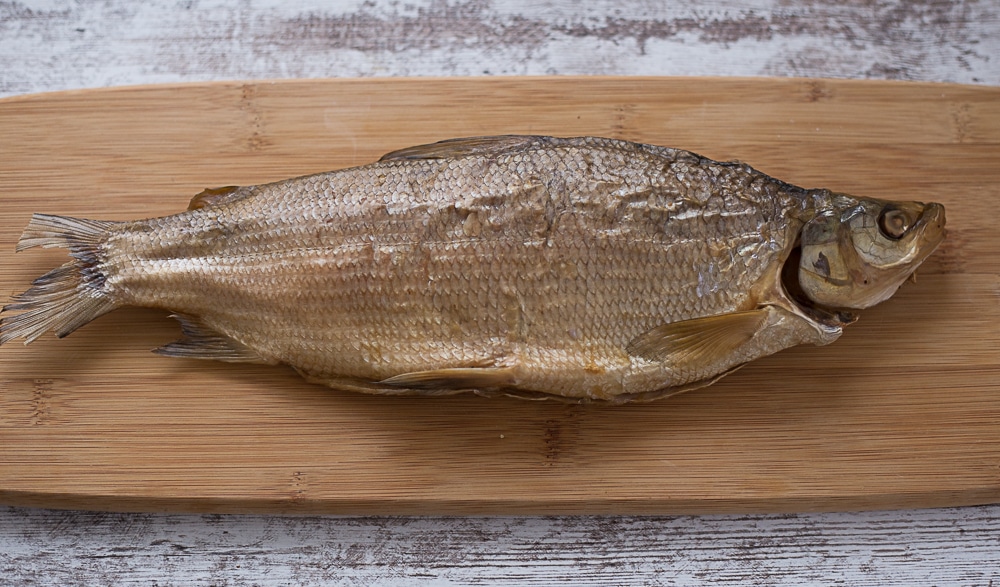 Smoking whitefish is one of the most popular ways to prepare them. If you would like to learn about the process, check out “How to Make Smoked Whitefish”. Whitefish can be used in many ways after being smoked. You can make smoked whitefish cakes or any number of smoked fish spreads and dips.  That said, this mousse is one of my favorites. It is light, smokey, and makes a delicious appetizer. I like to use a piping bag so that I can easily pipe it onto celery or into cucumber cups. 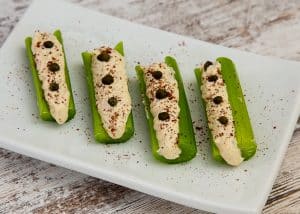 Smoked whitefish mousse on celery with dried sumac and capers

1 tablespoon grated shallots, (I use a microplane to grate it down to a pulp)

Once you’ve gathered everything, place all the ingredients in a food processor and blend until smooth.  You can then use a piping bag to pipe it onto your favorite snacks.  You can also skip the piping bag and just use a knife to spread the soft mousse.  Enjoy! (Note: in the image I have dried sumac and capers included.)

For more delicious ways to prepare whitefish check out these other Modern Carnivore recipes!

How to Make Smoked Whitefish