Spearing Fish (Through The Ice)

Fishing In The Dark

It always takes a bit to adjust to the green glow of the big picture. Rusty from lack of practice, my movements from the decoy jigging were not pretty at first. My son was taking a phone video of  the rhythm of the decoy as it swung in circles under the ice.  A startling motion suddenly grabbed us and the decoy was hit, taken as prey and held by it’s captor. The spear plunged. The water clouded.  A northern pike hung off the end and we scrambled to get it out on the ice. 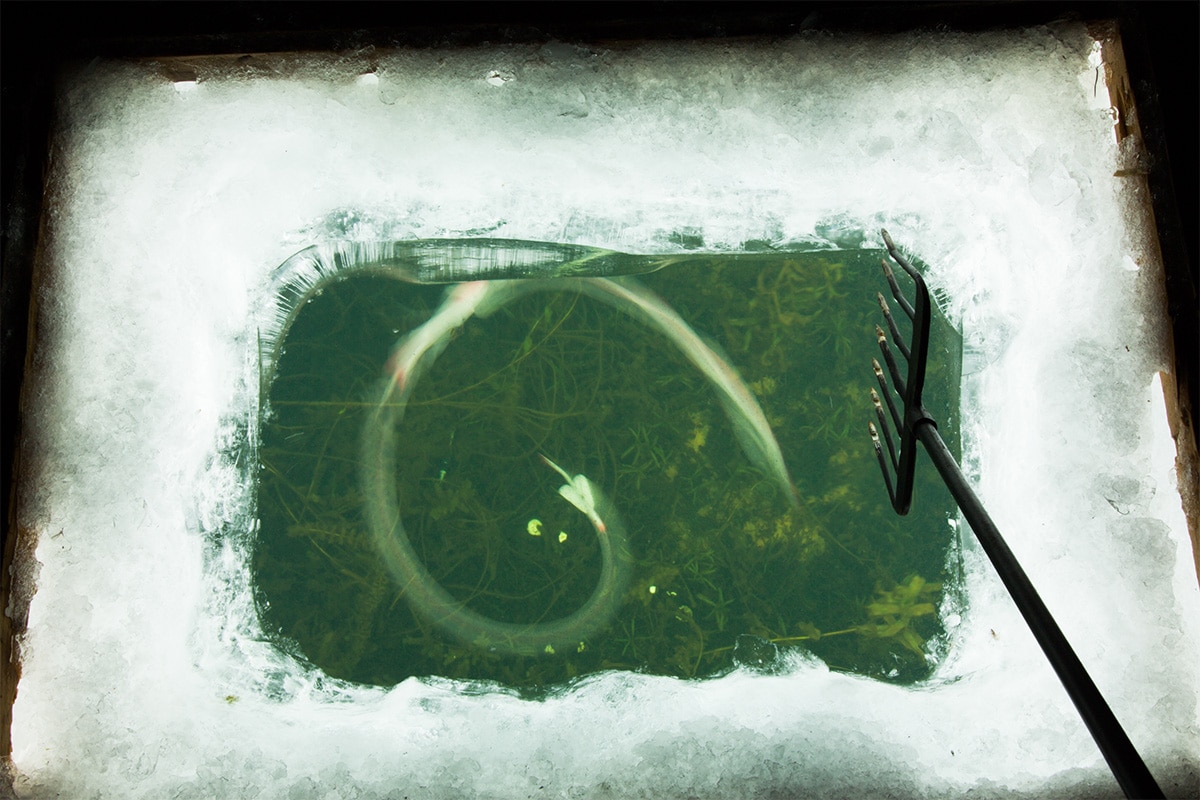 Thirty seconds into a recent winter trip up north to try our hand at spearing fish, my son’s first, he pulled out a sizable pike. The adrenaline rush left us shaking for several minutes after.

Spearing fish through the ice is a unique experience that breaks up the occasional monotony of winter angling. Don’t get me wrong, it can also be monotonous at times. Think of deer hunting from a stand, only under water, and warmer if you have a propane heater.  As the name implies, a dark house is void of windows or any other light source, allowing you clear vision into the water below. There is a weird calming sensation that washes over you as you peer through a large rectangular hole into the underwater universe. Weeds ungulate in that fantasy-world green cast of light. The fish like decoy scribes circles, guided by a pull of the line in your hand. When a fish appears, sometimes they slash and grab the decoy and other times ease in and just stare it down. There are not many dry fishing experiences that allow you to be immersed in a fish’s world and watch unnoticed until you make a move.

View from bottom of lake looking up at ice fishing spear, hole in ice and jigging decoy.

Over the next 90 minutes we passed on several fish and called it a day with an even bigger northern on the ice.  This much action and number of large pike in 90 minutes is very rare.  We were lucky and appreciate the great guy who let us use his house.

Spearing fish through the ice reaches way back to many cultures along the cold fringes of the globe. Native people in many places often sat under draped buffalo skins to block out light. Wood or bone decoys were carved and spears where tipped with bone or copper. Fish served as an important part of their diet throughout the year. (more on the history of spearing fish through the ice) 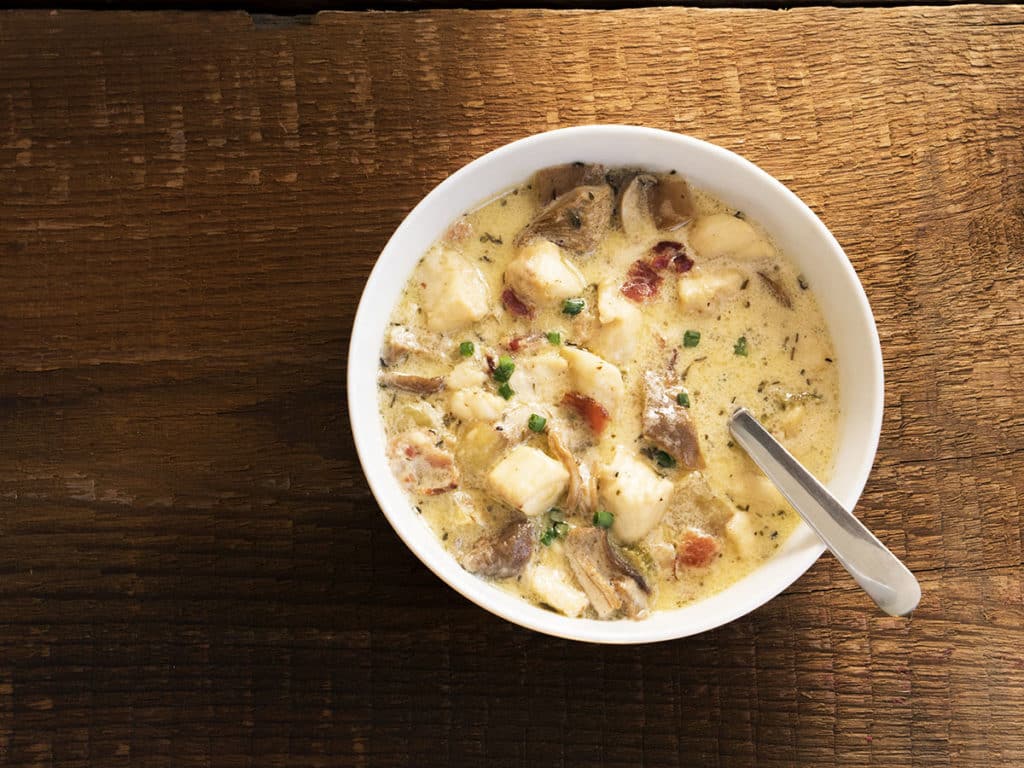 Fish Chowder Made With Northern Pike

Over the past few weeks we have relished cubed deep-fried northern bites and a great fish chowder * pictured here. Soon I will pickle a batch with my dad’s recipe. It’s always a highly anticipated appetizer at Christmas. The bones dissolve and the meat is firm, unlike pickled herring.

Northern pike sometimes gets a bad wrap on palatability.  Flavor does vary depending on the time of year, lake, and preparation, but taken from cold water it stacks up against any other fish. Whitefish is also a common spearfishing quarry in these parts and can be prepared a number of ways (watch video). One of my favorites is the never-miss smoking process.  In Minnesota, where I live, you can spear northern pike, whitefish, channel catfish and rough fish.

If you want to combat cabin fever, take on this unique fishing experience and watch the original big screen. Savor the results. 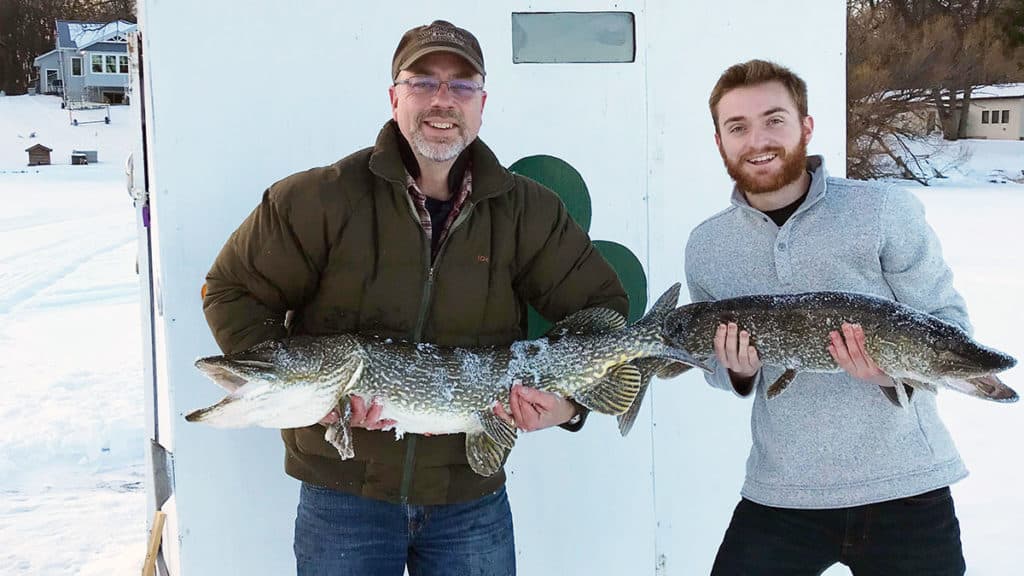 Author and son with their northern pike from a day of spear fishing on the ice in northern Minnesota.

* Fish Chowder adapted from Roatnotrunner’s recipe on the Chowhound website.

All photography in this story are the property of Phil Aarrestad Photography (www.philaarrestadphoto.com)